Who are Boney Fido? 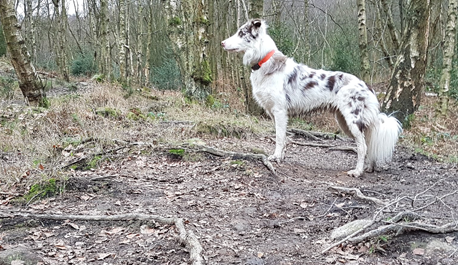 Zombie ("you can't call him that!") came to us from one of Dave's clients, when it became impossible for the client to give Zomb what he needed, due to G's serious health problems. So that's when we took on this wild boy, who rather fittingly, really does seem to be our Fred, come back from the dead!

Zombie is a soft, silly, floppy boy who can't just sit for a cuddle, he has to throw himself on the floor for a tummy tickle, or lay sprawled all over you on the sofa!

When he first came to us he had NO idea how to stay calm when he saw other dogs, cars, people, etc, And retrieving? What's that?! Thankfully though, he now has a ball (lol) bringing toys back to the hand wonderfully, and has made firm friends with our own Mini Boney Fido. He had grown up with a very young child in the house, so introducing him to Mini BF turned out to be much easier than it might otherwise have been.

He has come on in leaps and bounds since we got him in July 2017, and will hopefully be seen demonstrating agility, retrieving, and obedience, at Sheffield's summer fayres in 2019. 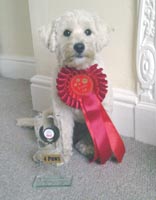 Wysiwyg, or Wyz as she's known, is the best present a person could ever have! A gift from a friend (thank you!), she has plenty of cuddles and fun to give and give.

Now, at nearly 8 in 2016, she is still going strong, and is often mistaken for a much younger dog!
(Update 2019: She is now 10, and still LOVES agility, tricks, retrieving, and still surprises people when you tell them her age!)
Wyz is a perfect sloth at home, but is up for it once shown a tuggy or some food :-)  A fun-loving dog, she is a fantastic pretend gun-dog, great at agility, and is always keen to learn new tricks - especially if there's a tasty treat or tuggy game involved!

Take a look at the agility page for a peek at Wyz competing with Liz in a team event.

Just for fun, here's a video of little Wyz tunneling to Australia :)

Freddy Dog!
Freddy is the dog that started it all back in 2005.

​In 2002, we just 'popped along' to Thornberry Animal Sanctuary to walk some dogs. Well, he only went and thumped his great big paw on Liz through the bars. It was love at first sight. "Can we take him home?" And that was that.

Liz found that Freddy really enjoyed learning new things, especially when there was a tasty treat or the throw of a toy involved. They dove into learning all sorts of crazy tricks; one of Liz's favourites (there were many favourites) was Freddy walking backwards around and through Liz's legs.

​Freddy has strutted his stuff at many summer fairs and various shows. Both Dave and Liz have competed in agility and won lots of rosettes with Freddy, and for a non-gun dog, he's not a bad retriever.
12 years on, he still loves to join us for class whenever he can. Sadly, an ageing, yet still enthusiastic, Fred is now pretty much retired from classes, as it's hard for him to do stuff now. Plus he's hard of hearing (no, really, it's not just selective hearing lol!)*

In 2014, we finally had Freddy DNA tested to find out just what Freddy is - NO, not a 'dog', smartypants - which breeds likely make up the dog that is Fred. Turns out, he is GSD, a lot of Greyhound, quite a bit of Australian Shepherd dog, plus many other little bits and pieces, including a Mini-Poodle!! Genes, eh?!

​Why not take a look around our site and come and join us for some cool training fun, and maybe teach your dog a thing or two?!​

*Our Fred sadly passed away in 2015, at the grand old age of over 13 and a half.
We had done a LOT of training with Freddy and enjoyed doing so much cool stuff with him. Check out his awesome skills below: 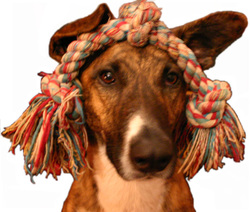 Here's Freddy in his heyday (8 and a half here.) He has had a lot of heydays...!
Freddy showing off his gun dog skills; not bad for a GSD x greyhound x Australian Shepherd x ... !
We hope you've enjoyed reading a little about who we are and what we do, and look forward to helping you with your dog soon!
Boney Fido Dog Training is covered by Cliverton insurance for £5M Public Liability insurance and £100K Professional Indemnity.